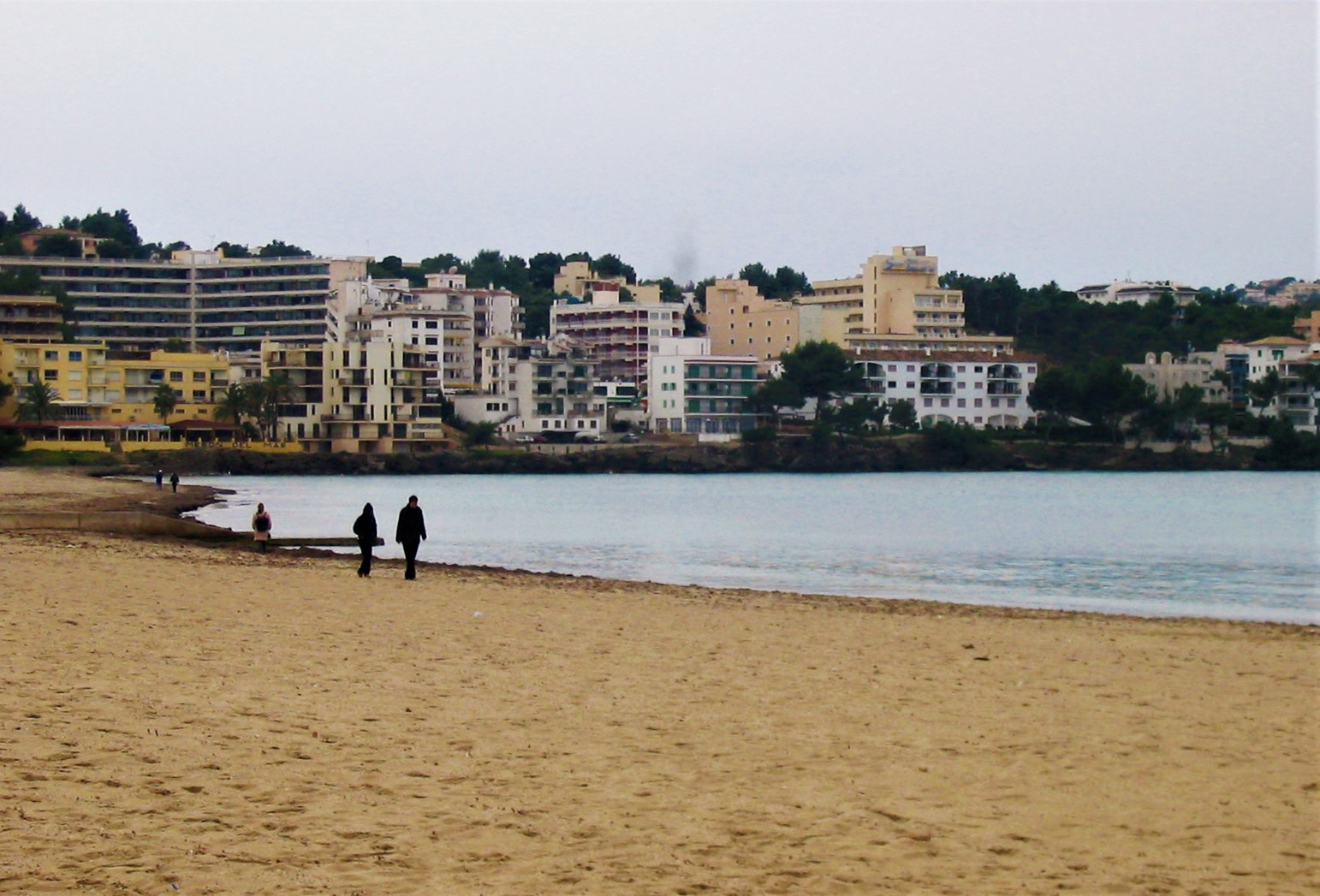 King James I of Aragon landed on the beach in Santa Ponsa in 1229 when he conquered Mallorca, wrestling it from the Moors who had ruled the island for over 300 years. Hardly a trace of its history is noticeable here as you wander around town, apart from a cross above the marina erected to commemorate the event. What is much more obvious is the number of resorts, golf courses, and family-oriented activities that must be in full swing in summer, which made me thankful that I chose to come in the off season.

Santa Ponça, said with a lisp in Mallorquin, was really serene and calming in colder weather; however, I imagine that in the summer, it is overrun with tourists, predominately British, an assumption based on the number of UK-themed pubs and restaurants in the area. I was on a solid diet of fish and chips when I was in town, with not much else available year round. Most of the touristy shops, arcades, and clubs were also closed, which was just fine by me. Not what I was looking for anyway.

I Am A Cheapskate

The reason I opted not to stay in Palma when I was in Mallorca was because I was looking to find dirt cheap accommodations for this trip. Even in the off season, Palma wasn’t cheap enough for me. Santa Ponsa was the good kind of cheap, as opposed to the bad kind of cheap sometimes attributed to the island.

Speaking of which, nearby Magaluf is quite similar to Santa Ponsa in fall and winter, with far more excessive partying during summer months. Fun fact: this excess has recently led the city to ban pub crawls and drinking in the streets after a rash of bad publicity ended up on social media. It’s too early to tell whether this will move some of this behavior to neighboring resort towns like Santa Ponsa, but it’s something to watch out for as these changes are implemented.

Santa Ponsa In The Off Season

As it was not crowded, the cafés, the promenade, and the beach were relaxing and tranquil, perfect for reading, sipping a café con leche, and enjoying the sun. Not bad at all really. I managed to finish George Sand’s Winter in Mallorca at a café, which I don’t think I could have done without being on the island because the book was quite a slog. A nice read for a bit of island history though.

Because we were staying out of the bustling city, we were able to rent a cheap POS car (queue Adam Sandler circa 1996) from a local place, literally on the side of the road, for only $25 (not Euros!) per day. Cars in Palma were way more expensive, and the options were generally the typical rental agencies that you’d find in the US. Peaceful and cheap when resting between road trips, Santa Ponsa was a great base from which to explore the island, since there wasn’t really much else to do there.

I did enjoy being able to relax in Santa Ponsa, but I don’t think it would be nearly as enjoyable in the summer. If I did book another trip, I would stay in either a small town on the coast in the Serra de Tramuntana (Estellencs or Banyalbufar), Palma, or Port de Soller now that I’ve gotten my bearings on the island.

Getting Around From Santa Ponsa To Palma, Or What I Like To Call “Find A Friend”

Santa Ponsa was located approximately 18 km from Palma (so not a completely terrible cab ride) and accessible by bus from the airport and the capital. The bus stop was not all that convenient, but it was doable (and I did do it once) if you planned on leaving all day and not returning until you were ready to crash for the night.

Truth be told though, I cheated most of the time. A friend of mine lives on the island, and I made him drive me around Palma at night. He is a local, born and raised in Palma, so he took me to a bunch of local, divey bars, and some places that you need a car to get to on the outskirts of the city. I don’t remember the names of any of them, and I wasn’t exactly all that sober most of the time, so I’m not much help with specifics unfortunately.

There is no shortage of dance clubs and bars though, if you’re looking for that sort of thing, which I was at least part of the time. Pro tip: Pacha on Mallorca is not nearly as exciting and fun as Pacha on Ibiza. Delicious tapas can be found in just about every establishment as you wander through the city center. I highly recommend finding some of the more underground bars to dip into to find cheaper tapas (if not free tapas, but the best tapas are mostly not free, sadly) and have a more authentic experience. There are tons of places to choose from.

We had a fantastic time though, and the city is really beautiful by night, with cobblestone streets, a picturesque harbor and the cathedral, Le Seu, looming over the city. Walking around the harbor by the boats in Palma at night was surreal and makes you feel like a million bucks. Or like you wish you had a million buck. Whichever. That was my impression anyway.

I’m sure I missed out on lots of sites and experiences by not visiting the city much by day, but I choose to look at it as leaving touristy Palma for my next trip.